Our Favorite Games from the ChiTAG! (Chicago Toy and Game Fair)

- December 10, 2018
Chicago Toy and Game Fair Favorites!
It's no surprise to those that know us that we have a dedicated "GAME CLOSET" in our basement!  We absolutely LOVE playing board games and card games!  It's not uncommon to find us and our two kids huddled around a game each night of the week before bedtime, but we also love to share this passion with our students in the classroom, too!

We recently visited the Chicago Toy and Game Fair as a family, and we were all amazed by the awesome new games available on the market!  We picked some of our favorites that work for both home and school, and we've listed them below in no particular order!

1. Word Search Game (Goliath Games)
Word Search Game is a "Fast-Paced, Multiplayer Word-Finding Game!"  It's a fun, new twist on the classic word search!  Play as a family or small group and search for common words from multiple lists!  *The picture below uses an Affiliate Link for us.

2. Wing It
Wing It is "The Game Of Extreme Storytelling!"  Developed by Flying Leap Games LLC, Wing It encourages creative thinking by having players solve potential disasters using random resources!  We've had a blast with this game at home, and Trisha is excited to use it with her students as well!  *The picture below uses an Affiliate Link for us.

3. Schmovie (Galactic Sneeze)
Schmovie is "The Hilarious Game Of Made-Up Movies" and hilarious is an understatement!  We have had a blast with this game in our house!  It's considered a family or party game but would definitely encourage creativity in the classroom, too!  *The picture below is an Affiliate Link for us.

4. Hydro Strike (Pressman Toys)
Hydro Strike is a fast-paced pinball style game with a twist!  Players try to score goals against their opponent, but a point is not all they get!  When a goal is scored, the player who gets scored on also gets sprayed with a stream of water!  We absolutely LOVE playing this at home and hearing our kiddos laugh when we get sprayed!  *The picture below is an Affiliate Link for us.

5. Build Or Boom (Goliath Games)
Build Or Boom "helps build STEM skills such as analytical thinking and shape recognition."  Players try to recreate a design from a card using physical blocks, but they have to do it as fast as they can.  The opposing player is also trying to build a structure from a card.  Sounds easy, right?  Well, there's a reason you need to build fast!  Whoever builds their structure first gets to blast their opponent's structure!  *The picture below is an Affiliate Link for us.

We'll be doing some video reviews of these games and more over on Adam's channel www.teacherslearn2.com soon!

(*We do use an Amazon Affiliate link for each of the links above.)

Popular posts from this blog

2018 has definitely been a year of ups and downs for us at the Peterson household.  We've experienced a ton of change this year, both positive and negative, and each experience has reminded us how much we have to be thankful for!
The changes started to hit hard when I (Adam) made the decision to leave the classroom after 13 years in the same Kindergarten room.  This was a decision that brought us closer together as we hashed out every possible (good and bad) situation through many late night talks, number crunching, and discussions with family and friends.  In the end, taking this leap of faith prevailed, and I have been lucky to create some awesome relationships with teachers across the country through my workshops and social media outlets.  While never questioning the decision, there was one conversation that proved to me that the decision I made was definitely the right one.  In August, I was speaking to the Cleveland Metro School District Pre-K teachers at their start of the ye…
Read more 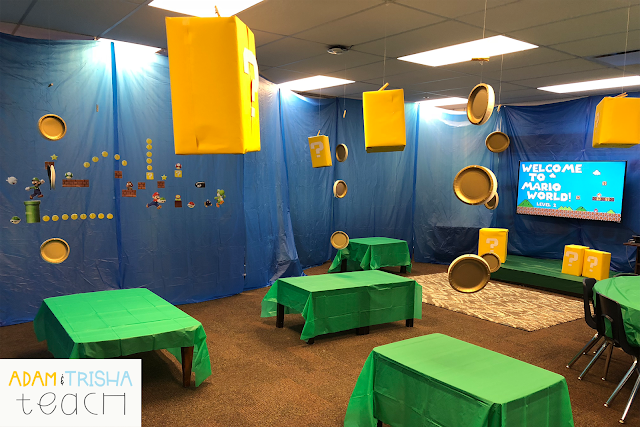 Last week my 2nd grade classroom was transformed! In my first room flip of this school year, I decided to redo a favorite flip from last year...Mario World!  This originally stemmed from an idea we saw from our friends, Hope and Wade King, but I adapted it for me and my classroom!
The setup was SUPER (no pun intended) SIMPLE! We used blue and green plastic tablecloths from Dollar Tree, gold paper plates, and shipping boxes that we had saved.  You can see exactly how we hung the blue tablecloths in this video. The kids had no idea this was happening and were simply told to wear red or green to school that day. Throughout the day, we incorporated all of our current curriculum goals and standards into some fun activities!  The activities were all hidden inside the coin boxes that were hanging or stacked around the room! Inside the boxes, the kids found and completed the following games and activities. 1. Stomp The Goombas Each student had a recording sheet with directions for finding words re…
Read more

Cloudy With a Chance of FUN! 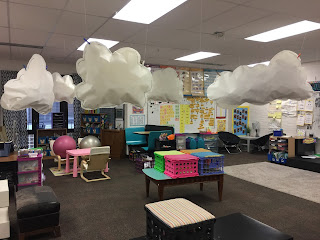 Cloudy With a Chance of Meatballs was one of my favorite childhood books, and I've always wanted to use it with a weather unit. As our weather unit was approaching, it was time for a change!
On the Sunday before starting our weather unit, Adam helped me to make some huge clouds to hang in my classroom. It took some time, but it was definitely worth it! The kids were so intrigued as they walked in on Monday! We started the week learning all about different types of clouds. We read lots of nonfiction text and worked through some nonfiction text features. Then, we did our phonics lesson with shaving cream to represent clouds. It always amazes me how such a simple change in a lesson gets the kids so engaged and involved! As the day went on, we dug a lot deeper into our nonfiction text and did some cloud writing. Later, we did an experiment showing part of the water cycle. At the end of the day, I read the beginning of Cloudy With a Chance of Meatballs. After reading the page about it …
Read more 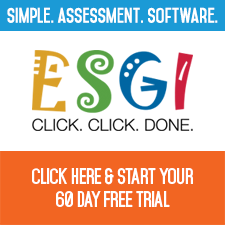